Marriage Story: The movie and real life, as reviewed by a Divorce Lawyer

Marriage Story: The movie and real life, as reviewed by a Divorce Lawyer

I think about marriage often. I have loved. I have been loved.  I have witnessed love and I have witnessed pain- like most humans. Being a divorce lawyer does not categorize me in a special way, but it does give me unique insight. Helping people put the pieces of their broken lives, finances, and families back together is my job. 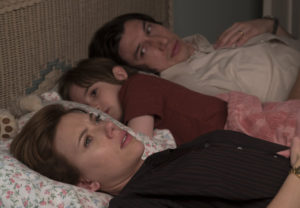 I just watched the movie Marriage Story, featuring the talented Scarlett Johanssen, Adam Driver, Laura Dern, and Ray Liotta.  Laura Dern plays one badass lawyer.   I love her character’s cheeky use of her sex and reputation to put it all out there and be a badass.  (Oh wait, that’s me!)

This film will, no doubt, win awards.  With incredible acting and a raw and heartfelt story, it makes you laugh and cry, but not in that conventional Hollywood way.  In a genuine way, that leaves you feeling a bit uncomfortable, but at the same time, relieved.  Because it is unconventional, it’s the only movie where, when you watch it with your aunt over the Thanksgiving holiday, one of you may say, “Do you think that portrayed him or her more at fault?” and the other, perhaps the divorce lawyer, says, “Neither. I think that was the point.”

As a lawyer who has counseled countless clients through divorce, and a single person who wishes for a loving partner, I think my future wedding vows would be unconventional and certainly not traditional, much like Marriage Story:

“I love you and hope we will be together for a long time.  I admire and respect you.  I want us to both be happy and to grow old together with lots of laughter, joy and growth.  If things don’t work out for some reason, though, as painful as that process may be, that is ok, too.  What is important is that we are here and now, in the moment, and celebrating.  I will do my very best for you and for me.”

Less romantic, yes, but clearly less stressful.  And, given my experience and statistics, far more realistic.  The vows won’t win in “Romance” category, but to claim they are not “from the heart” would be unfair and inaccurate.

And this is what I loved about the movie.  It did not create unrealistic expectations, nor did it portray divorce as a traditional fall from glory or a “failed” attempt.  It portrayed real life.  People do their best.  They change and grow and hopefully, try to do the right thing, just like the characters in the movie.

And sadly, the legal system has to muck it up, or at least make it very difficult for the average person just hoping to move on with dignity.  {Spoiler Alert} The most relatable scene as a divorce lawyer was when the “Child Evaluator” came to meet the father, Charlie, while interacting with his son.  In a sad but darkly hilarious scene, Charlie’s son exclaims, “Yeah, Dad! Show me the knife trick!” in front of the drab, expressionless interviewer; said shortly after the interviewer saw the small hole Charlie had punched in the drywall during the argument he had with his soon to be ex-wife, just the day prior.  And what’s great about the movie?  It’s not just Dad.  Charlie’s new high-powered attorney (his kind lawyer, Bert, had to go…) played by Ray Liotta, points out in a court hearing how Nicole had too much wine one night and after putting their son to bed, stumbled down a couple stairs unsteadily; therefore, she is branded in court as an alcoholic.

As a divorce lawyer, the movie depicts the unpleasant reality of airing dirty laundry and sadly, how it is used as a manipulation tactic in the courtroom – a scene most couples cannot fathom when falling in love.

Marriage is something many people want, including me, but it is put on a pedestal of unrealistic expectations.  A lot of people have asked me of my views on marriage over the years.  Since I’m a divorce lawyer, they think I must carry a special badge of wisdom.  Unfortunately, there are no secrets I can unmask, as I too suffer from loneliness, Tinder swiping through the shuffles of persons in my daily batch.  While I have not contemplated the issue of marriage in tremendous depth for myself, as I have never been engaged or married, it’s surprisingly easy to focus on the numbers, the assets, the schedules, and other turmoils of my clients.  It is actually how a divorce lawyer often survives the emotional burden of absorbing someone’s pain and distress on a regular basis.  This is not to say I’m not compassionate; to the contrary, I am.  Which is why I have to step back from the emotional aspects of my clients to use rationality and logic to intelligently fight for them.  On more than one occasion, I have shared this fact with my clients, so as not misinterpret my lack of objectively verifiable evidence of passion in our crusade for justice and fairness.  Lawyers are human, too, who must maintain personal boundaries.

Speaking of crusades, I finished reading Amy Schumer’s book, “The Girl with the Lower Back Tattoo” on my flight home from Thanksgiving break, the same break where I may or may not have watched the movie with my aunt.  And yes, the book came out three years ago (cut me some slack, I have trials to conduct and clients to represent!)  The fact that I identify SO MUCH with her stories, though, reminds me that maybe marriage is not for me? Or alternatively, maybe it is just what I need!  Now, isn’t THAT thought process the very stability my future partner is looking for, my friends?  (By the way, Amy Schumer is now married with a child).

Whether science based, culturally based, or spiritually based, countless articles have been written on the topic of marriage.  In today’s age, it’s often hard to pinpoint trends and reasons why people marry.  Countless reasons exist for marriage: from custom and religion to health insurance or citizenship.  With today’s quantified divorce rate, I don’t feel qualified to judge any reason to get married, quite honestly.  You do you.

But why do I still “maybe” want to get married?  I ask myself this every day.  I see the most authentic, love-based marriages dissolve on a regular basis.  And strangely, I am still not jaded.  Why?  My parents have been divorced multiple times.  I have not had many successful role models in marriage.  That would be crazy to do then, right?  I believe that marriage is a risk, but a risk I wish to one day take.  I believe it is a commitment to another human being that puts you in a position of utmost vulnerability.  And for me this is the bottom line: I believe that the most successful relationships contain the most vulnerability. Prenup or not, I’m talking about “emotional” vulnerability.  (Don’t worry, you can still hire me for your prenup.)  What I’m talking about is something deeper – something we as humans live for; true human connection.  No intimate relationship can be successful if it lacks true vulnerability.  Marriage Story demonstrates the reality that, even when taking the leap of faith, things don’t always work out.  But it also demonstrates that this is OK and that is just life.

For many, getting married is saying: “I am putting my future and my fears and my desires and all of the things in jeopardy for this person.”  It exposes a partner to the risk of “laying it all out.”  For a person that can say and do that, and have the other person say and do the same; THAT is the love I’m talking about.  THAT I can say yes to.  That is love.  And that’s all the proof I need.  Now…please don’t feel offended as I quickly write up the prenup.

Jenny R. Jeltes is the owner of Law Offices of J. Jeltes, Ltd. She practices in all areas of family law, adoption, probate and guardianship.